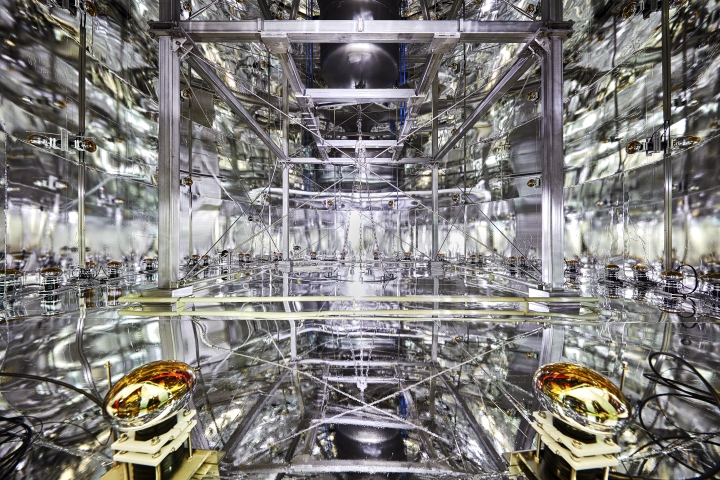 XENON1T, one of the world's most sensitive dark matter detectors. Gran Sasso Laboratory, Italy. Copyright: Enrico Sacchetti. This photo cannot be used without prior permission of the photographer.

95% of the universe is missing

"In a spiral galaxy, the ratio of dark-to-light matter is about a factor of 10. That’s probably a good number for the ratio of our ignorance-to-knowledge. We’re out of kindergarten, but only in about third grade."

In 2019 Science Gallery London will delve into one of the biggest and most profound mysteries in contemporary physics – dark matter.

Scientists have been hunting this elusive matter for nearly a century, but it has never been directly observed. But theories like gravitational lensing persuade us that it exists, and could function as a kind of cosmic scaffold, holding the luminous galaxies that we see in place.

We know that normal matter accounts for only 5% of the stuff that exists in the universe. In contrast, Dark Matter makes up over a quarter of the cosmos, and is invisible: unlike normal matter it doesn’t reflect or absorb light. And it is everywhere – scientists think that billions of Dark Matter particles are passing through your body every second.

95% of the universe is missing is a scientific and philosophical investigation into the fundamental nature of reality, with the theory of dark matter a starting point for conceptual investigations and experimental forms of inquiry

The season will feature a curated exhibition in Science Gallery London’s 500 sq.m. gallery space, alongside a dynamic event programme taking place in the gallery theatre, outdoor courtyard and studio spaces

We’re interested in for both existing and new artworks for the exhibition, and proposals for workshops, music and performance nights, film screenings and discussions that critically and experimentally engage with some of the following themes and narrative strands:

Of course other ideas are welcome. If you are a scientist or researcher working in the field of dark matter who is interested in collaborating with Science Gallery London, please feel free to contact our Events and Research Coordinator here

Interesting articles to frame the season theme include:

Science Gallery London welcomes submissions for existing artworks, films, performances etc. as well as projects which are still at a research and development stage.

Selected candidates will be granted an appropriate fee and production costs for the realisation of their project.

Whenever possible, we would like for candidates to be present at the launch of the season in May 2019.

Check out our tips on what makes a good open call submission here.

Good evening, about the call "95% OF THE UNIVERSE IS MISSING" I would like to know what to add as a description in the fields "Fit for Theme" and "Sales force: Average Score"
Thanks so much,
Stefano

Hi Stefano, please refer to the information about the open call found here:https://opencall.sciencegallery.com/95-universe-missing where all the themes we are interested in are listed. The seocond field is for internal use, please ignore this. Good luck.

Good morning, I am trying to fill up the application form but I am not sure about the image and video upload. My project is based on sound with no visual representation. should I upload a piece of sound as video?

Hi Yacopo, you can upload a piece of sound or add a link to hear it somewhere else, either works for us. Good luck.

Good afternoon. I'm trying to calculate the budget for my video installation, but I'm not sure how to approach it. It will require a video projector and speakers (I'm going to create the final video). Will the gallery provide the equipment and/or help with its installation or will I have to buy/rent it and hire a company to install it for the exhibition? Thank you Best Regards George

Hello George, the gallery will have some equipment including projectors and speakers for exhibition display. Depending on your requirements we may be able to use these, if you have particular / specialist requirements, it might be wise to cost an anticipated hire or purchase cost within your budget.

Good morning, I have a question about the form of project description. There are two forms under “Project description (200 words max)” One is “Provide a brief background to your project, and explain how it relates to the subject of the open call” and another one is “Fit for theme.” What is the difference between them? and How can I count 200 word of those two explanations? 200 word in total of two form or not? Thanks so much, Abe

Hi, I can't seem to find the information on the maximum budget for this open call. Could you please help? Many thanks Tereza

Hi Tereza, You may find the budget guidelines here useful putting together a budget for your project: https://opencall.sciencegallery.com/top-tips

Good evening, I would like to know if in the budget it must be included dismantling costs or the work once installed becomes the property of the London Science gallery.

Thanks so much, Stefano

Hi Stefano, the work remains the property of the artist rather than Science Gallery London, so after the show the works will be deinstalled and returned to the artist. You don't need to include deinstallation costs as the gallery technical team will do this. 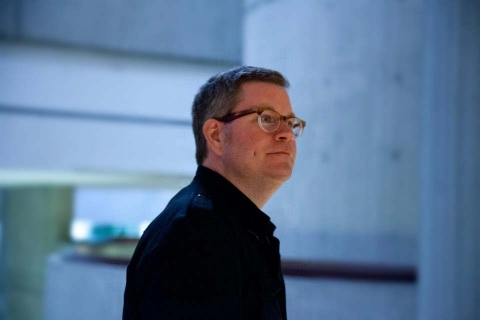 Supermajor
Matt Kenyon is an American artist based in the Metro Detroit area of Michigan, where he is also an Associate Professor in the Stamps School of Art...
END_OF_DOCUMENT_TOKEN_TO_BE_REPLACED